How to Have a Happy Home All week I was pondering what to write about. I thought maybe I would share some of our design secrets, but then I thought a better blog post would be to talk about colour. Then because Debbie and I were getting together some Christmas decor for our client’s newly renovated home, Christmas decorating seemed like a great post. And then all of a sudden it was Friday, then Saturday and Sunday, AND NOW IT’S MONDAY morning and the blog post still isn’t written. I guess I was too busy living life and enjoying our family time.. 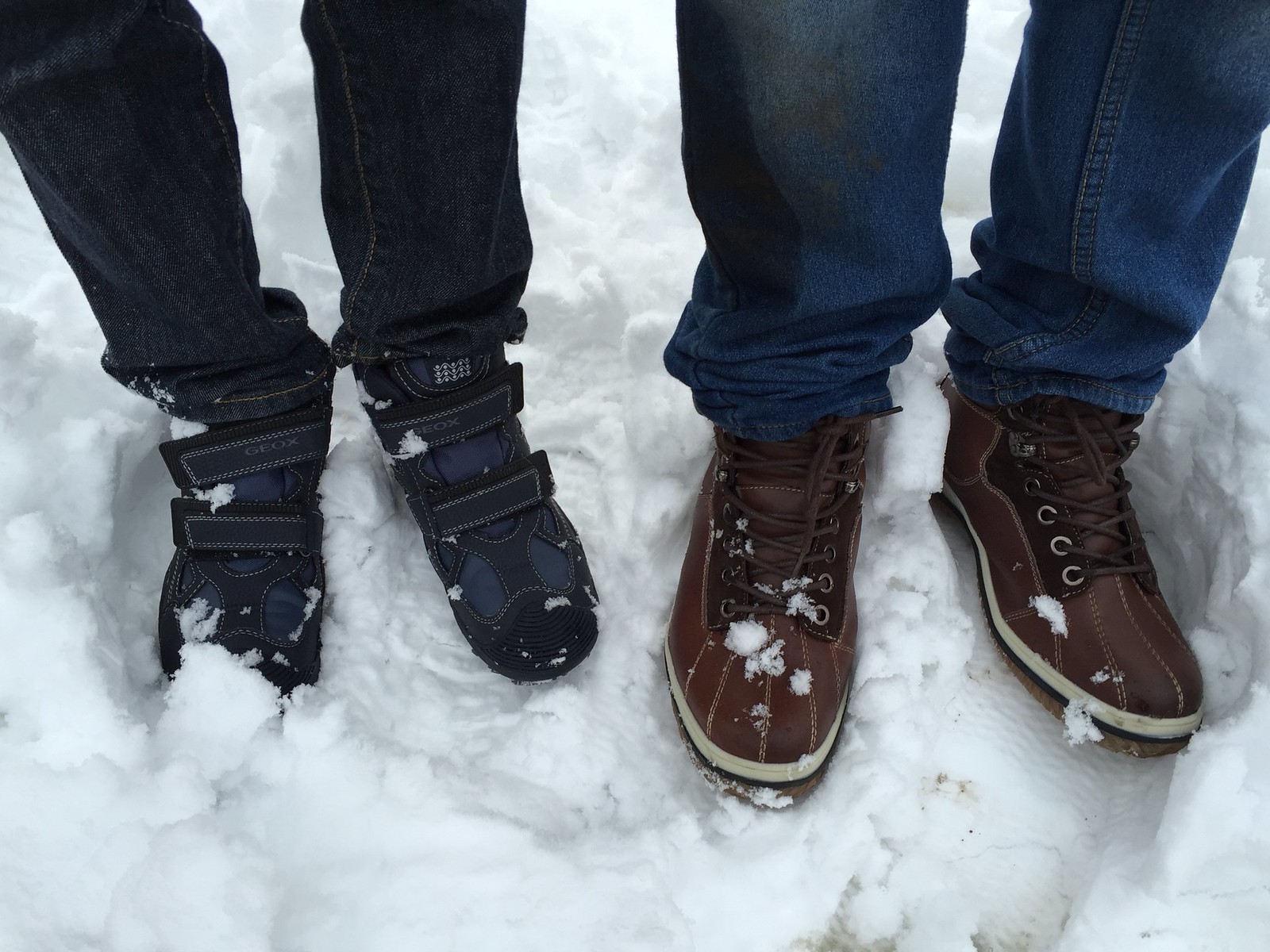 We shopped for the boys’s back to school clothes (only a few months late) and bought winter boots (just in time for the snow) and watched a movie together and prepared a nice dinner that we all enjoyed. Since the weather was so nice on the weekend, Rob and I worked in the yard and did one more round of leaf clean-up.

The youngest and I had fun putting together our outdoor winter planters. One of our neighbours was trimming their blue spruce, so we picked up all the clippings and filled our pots. Another neighbour trimmed their Schubert Chokecherry trees and I sent the boys to collect all those branches. 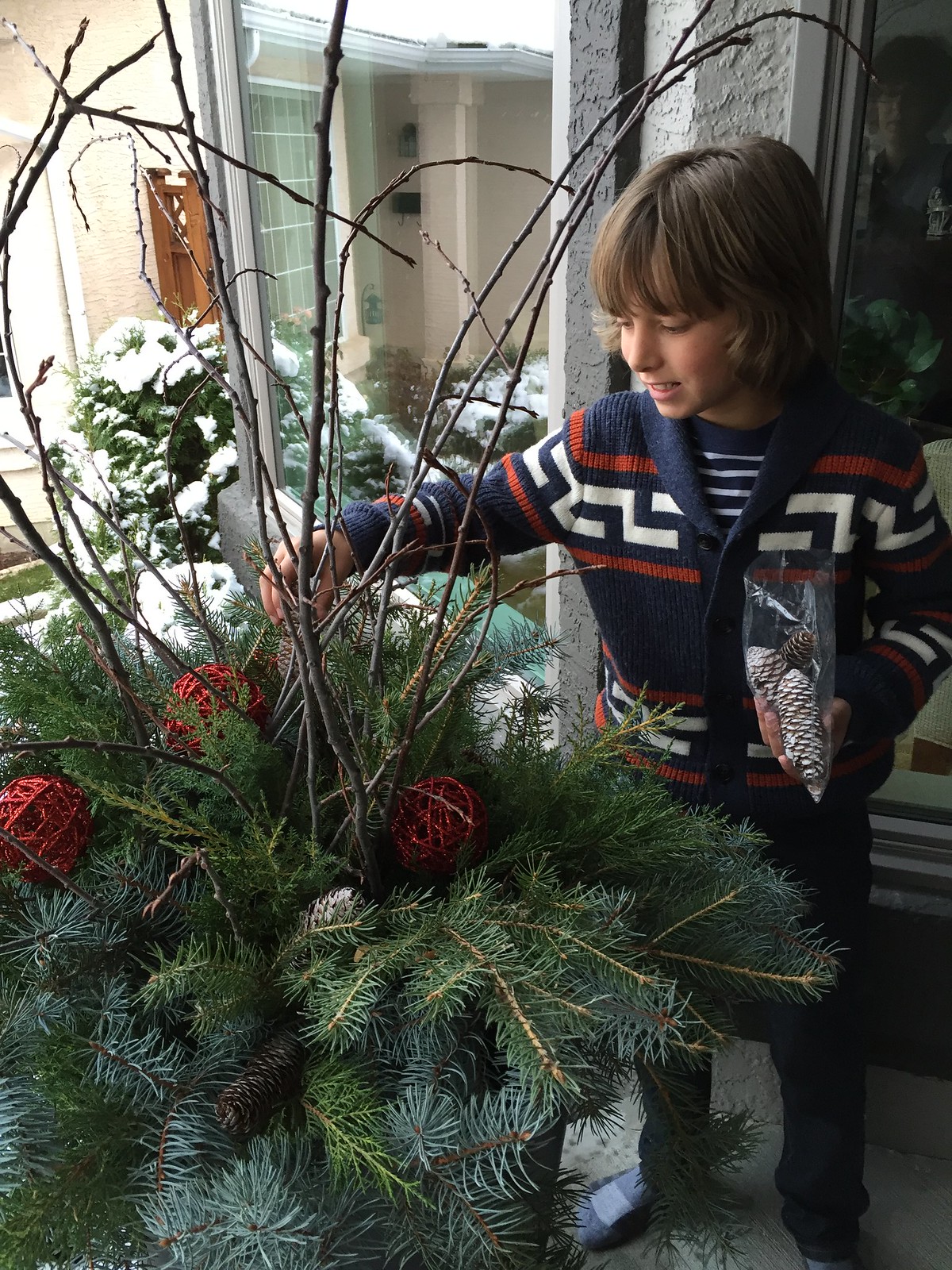 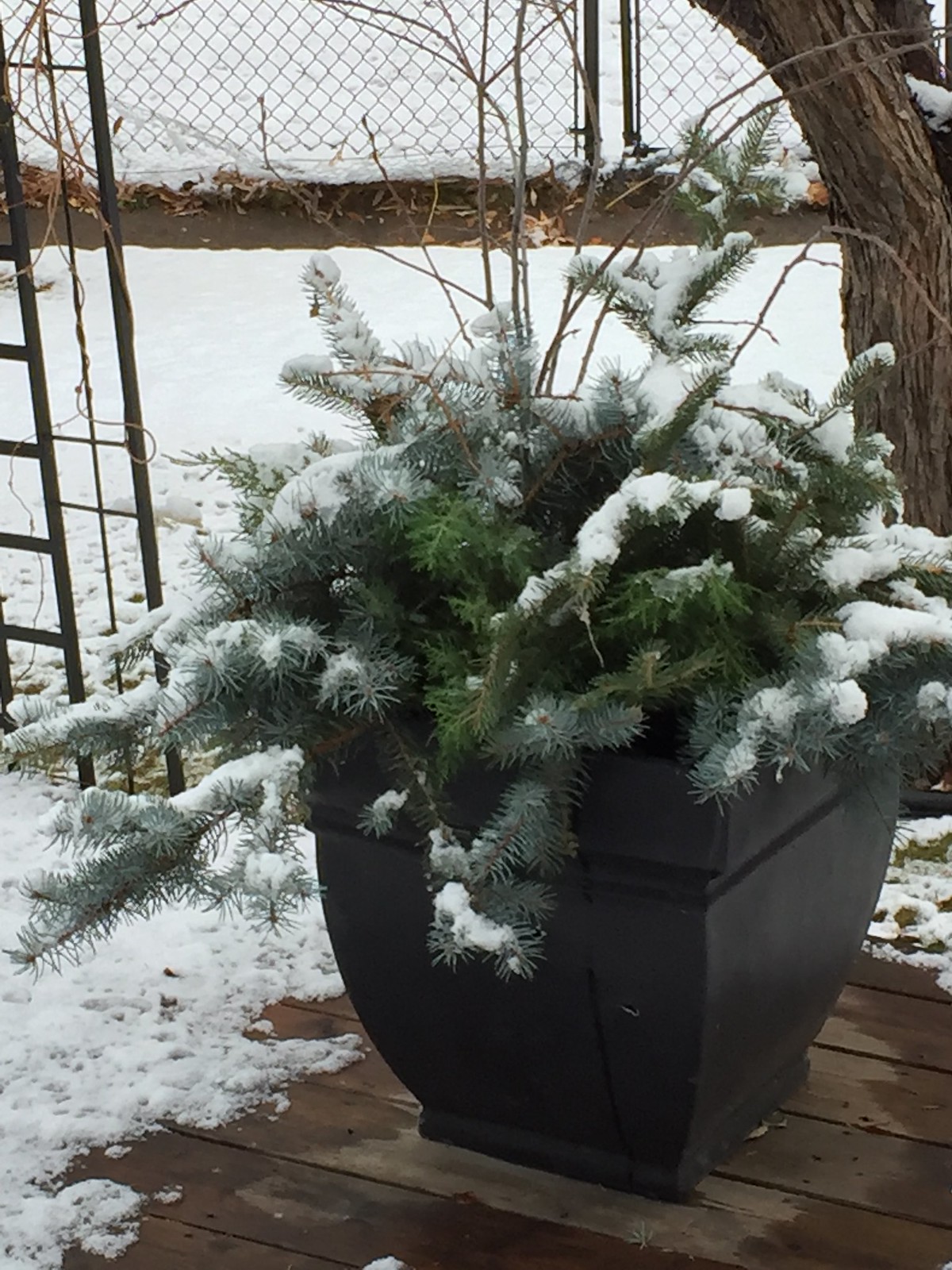 It was a great weekend. We enjoyed going out and about, but most of all, we enjoyed being at home. And that got me thinking that maybe I should write about the joys of home. Sometimes people think that because I do interior design, I expect everything to be perfect. I’ve even had clients apologize because their furniture wasn’t the latest trend. But that’s not what makes a home.

But for me, the number one thing for a happy home, is to make it the best it can be and enjoy it.

We offer a Design Style Package where we go in and use what people already own and rearrange everything so that it’s balanced and harmonious. We rehang art, rearrange furniture and display all their little treasures. Homeowners can’t believe that they can have a whole new look using what they already own. Sometimes it takes someone else to point out the good things. A few years ago I wrote about Fred van Zuiden and his book, Call Me Mom. We ran into Fred again at a book signing he was doing at Chapters. This was one of my favourite blogs, and with Remembrance Day just a few days away, I think the message is worth repeating. When I’m out on jobs, helping people with their homes, I often think about Fred living in a chicken coop and how they were able to make that a home.

Can A Chicken Coop Be A Home?

Fred van Zuiden was a nine year old boy when his homeland of Holland was invaded by the Germans. The year was 1940, and during the two years that followed, he endured worsening conditions. Eventually Fred left his family and went into hiding. In his book, Call Me Mom, Fred recounts his experiences of finding safety in twenty-six different places. During the winter months, our family reads novels aloud. Fred’s book was on our reading list last winter. It affected us deeply, and like any good book, we were saddened when the last page was turned. After some lively discussions about Fred, we decided we had to meet our new hero. On a cold day in March, we headed out to our local Chapters and met with Fred and his wife. Fred’s unsentimental writing style allows for the horrors he experienced to speak for themselves. Although he writes about the worst of human nature, he also tells about  average people that stood up for what is just. This is why my seven year old was able to enjoy the book along with the rest of us.

When the same novel is shared amongst a family, it’s always interesting to see what resonates with each. What spoke to my children was the bullying that Fred went through. My husband enjoyed the chapters on the planes bound for Arnhem. For me, it was about the places Fred lived, and the idea of what makes a home.

Moving twenty-six times in the years between 1942 and 1945, Fred stayed in many places. Sometimes he was living with families and sometimes his dwelling places were a little more creative. From the end of summer 1943 to mid-January 1944, Fred stayed at the Poultry Palace. Upon seeing his new home, Fred commented,

“The old ramshackle building had probably been built as a shed. There was not a grain of paint left on it and the wood had weathered badly. The structure looked as though it was about to fall apart. I rationalized it would make a good hiding spot. After all, who would think humans could live in there?”

When Fred knocked on the door, he was greeted by a father who was about forty and his thirteen year old son. They spoke in whispers and their constant quest was to make sure their new home always looked like a chicken coop. They had a few crates to sit on and a rough wooden bed frame covered in straw, which they shared with the chickens. Fred’s world now consisted of this six by fourteen shack, two strangers and chickens. Although danger and lack of food were constants, Fred says there were many sweet times. They followed daily routines, kept themselves as clean as could be, and concentrated on treating each other with goodwill and civility. Joking, reading, writing and celebrating holidays and occasions filled their day. In such despicable conditions, these human beings lived life.

Upon meeting Fred, I was intrigued with how normal he was. As if he would be anything but normal…yet I kept looking at him thinking about his young self, living in a chicken coop, or sleeping in an underground dugout. For somebody that lived through such horrors, he wanted to talk about sailing, skiing and share a good laugh. I asked him about living in the chicken coop and he said that he concentrated on making the best of things. On this day of remembrance, I pause to think of the sacrifices so many made. We of the 3,000 square foot homes, iPads, electric heat and grocery superstores can hardly relate. Yet I think of Fred’s words, ‘concentrate on making the best of things’. Let us today find joy in simple pleasures and give gratitude for what we have.

If you want to meet Fred, check out his website callmemom.ca where he lists his book signing schedule for the Calgary area. And yes, I believe a chicken coop can be a home if those living in it have hope and faith and gratitude.

I know some of you have seen that blog post a few times already, but each year I like to think about Fred and where he lived during the war. Meeting him was such a great experience. It really makes me value my warm and cozy home and the time our family can spend together.

You May Also Enjoy:

Remembrance of Things Past

Under The Calgary Sun

Why You Need to Decorate for Your Five Senses

So lovely, so true. I have added that book (a couple copies actually) to my list of Christmas gifts to be purchased
Thank you for sharing,
Bobbi.

It really was a highlight to read the book and get a chance to know Fred. Unbelievable what some people go through and how a positive attitude makes such a difference. Thanks Bobbi for your comments. I think that book is wonderful and anyone would be lucky to receive it. 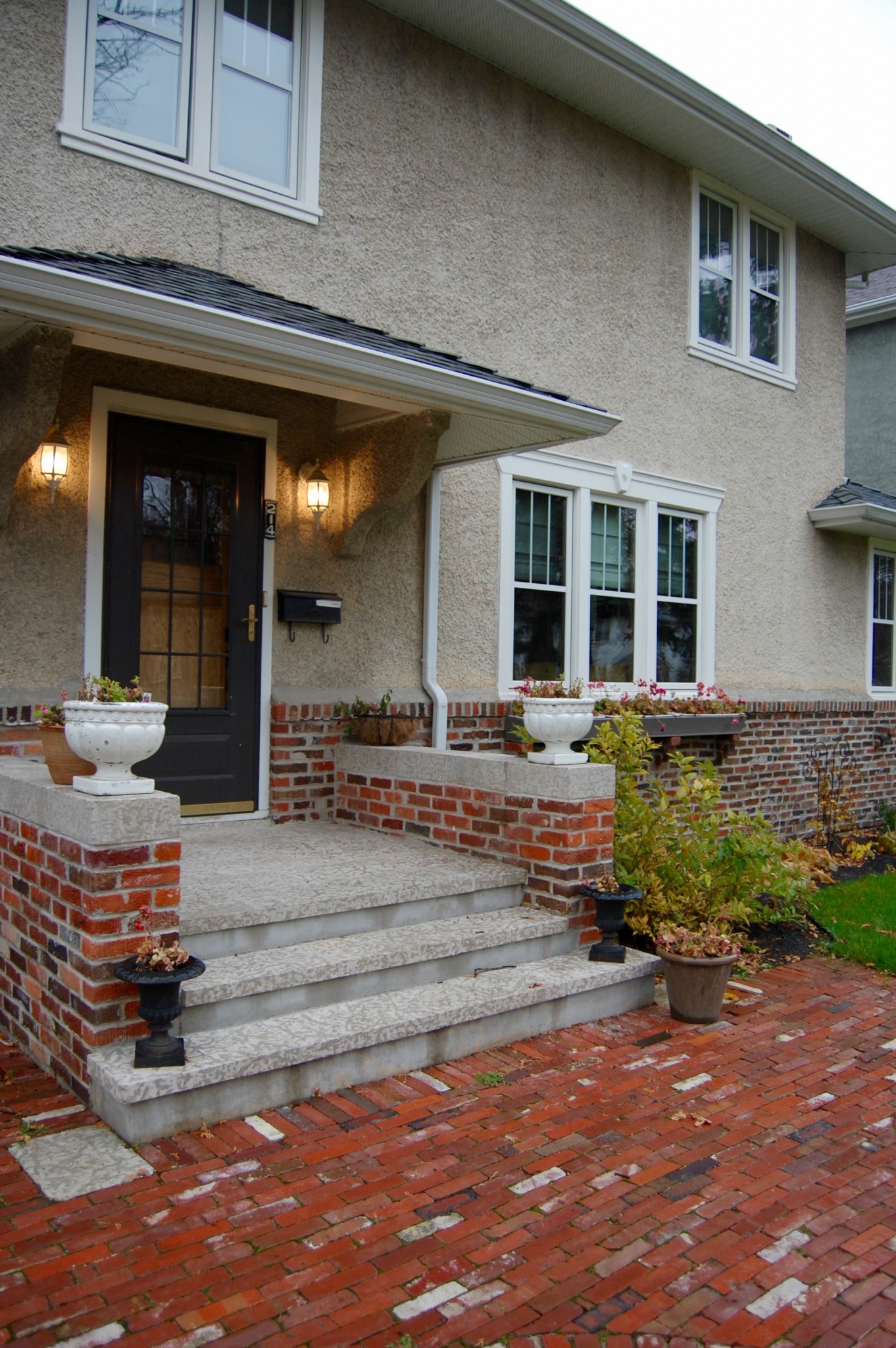 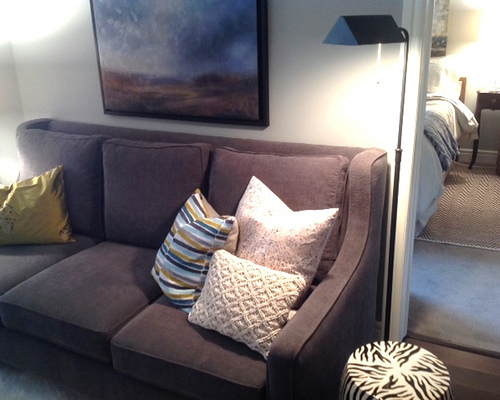 A Funky Condo...the after pics
Next Article