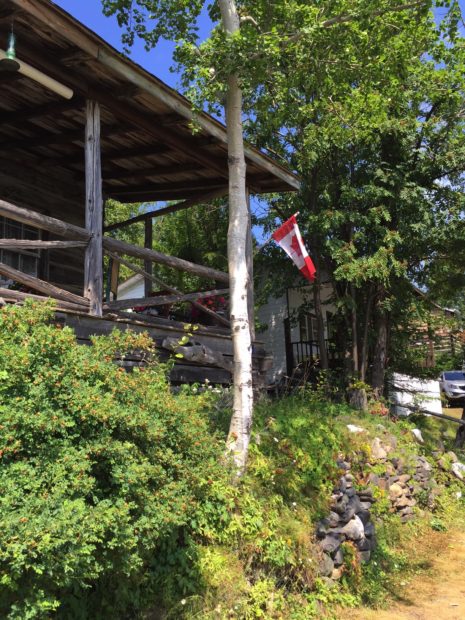 It always fascinates me how our country’s buildings differ based on geographical location. Think sod houses, log homes, and the strikingly bright colourful facades of Newfoundland and Labrador.

Canadians are resourceful people and we use what’s available to build with and to decorate with. A recent trip to Silver Islet, Ontario, showcased some beautiful decorating done with wood and rocks. The majestic scenery of Lake Superior provides a stunning back drop for the many summer homes on the islet. The cottages are lovely and there’s a quirkiness to the area that belies the hardships of the former inhabitants. To fully appreciate these cottages, some of which are over 100 years old, I think it’s important to understand the history of the hamlet. Silver Islet is one of Ontario’s oldest and best kept Ghost Towns. Over a hundred years ago it was a very profitable silver mine and it has a fascinating history of pitting man against the volatile forces of Lake Superior. The whole mining operation was an engineering feat, as the silver was located under a tiny island that was only 2.5 meters above the water. Barriers and breakwaters were built to hold back the powerful waves of the lake. New ways of mining had to be developed, and some are still being used today. What always interests me though, were the people who lived here and their indomitable spirit.

Silver Islet has captured the attention of songwriters and authors, including Jane Urquhart in her novel, The Underpainter, and Tanglefoot, with their song about the missing coal entitled, ‘One More Night’. The people of Silver Islet were a hardy bunch. They lived a pioneer lifestyle and depended on each other. Located on a small island near Thunder Bay, Ontario, back in the day it was accessible only by boat. All supplies had to be shipped in, making the mine shut off from civilization from November to May.

From the time the last ship departed in the fall, until the first ship arrived in the spring, they had to depend on their own resources and provide their own entertainment. During it’s heyday the mine was extremely profitable and over $3 million dollars of silver ore was extracted. The end came just as silver prices were starting to decline and profit margins were shrinking. There was talk of winding things down, but what really sealed the fate of the mine was an incident in the fall of 1883. Winter came early that year and the ship carrying the coal, which would keep the furnaces of the mine operational, didn’t make it to this tiny hamlet in time.

In the early spring of 1884, the furnaces ran out of coal. Despite the desperate attempts by the residents to feed the furnaces with wood from old buildings, water poured into the shafts. The mine at Silver Islet was done. A few hardy souls remained, but basically the mining town was desolate. The miners cottages were deserted and sat empty for several years, but by 1910, this began to change. The natural beauty of the area attracted day trippers who arrived by paddleboat. Soon the miner’s residences were surveyed and sold as cottages. The community of Silver Islet was becoming a cherished summer retreat. These people too were hardy folk. They came by boat, as the road wasn’t put in until 1945. Many people who summer here today are 2nd and 3rd generation inhabitants. Some of the residents cling to the old ways and resist electricity, preferring to live simply during the summer months. The miner’s cottages are all well kept and a walking tour of the main street showcases these beauties. Driftwood and rocks keep it rustic and add to the natural charm. It’s fascinating to see how the natural landscape is incorporated to provide functional elements and the decor is crafted from nature. I love the  stone steps and driftwood railings. The vastness of the Canadian landscape makes for some very unique buildings and decor. Silver Islet has a fascinating history and is very inspiring. If you ever get the opportunity, it’s still a beautiful place for a day trip.

Good Memories of My Store in Thunder Bay

Family Cottage Gets a Refresh

Before & After: Summer at the Lake